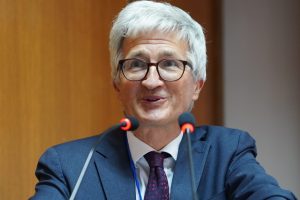 Professor Markus Vogt, Chairman of the Advisory Board of Ordo Socialis, has initiated a project at the University of Uzhgorod on scientific reflection and the social promotion of tolerance. Among our cooperation partners is Dr. Alexander Bokotey, Director of the Institute for Ecology and Religion in Uzhgorod and a member of our Advisory Board. Against the background of the current conflict with Russia, this is a highly exciting project. We talked about this with Prof. Vogt and his assistant Rolf Husmann. Arnd Küppers asked the questions.

Dear Markus, you have initiated a project “Tolerance at the Borders of Europe”, which is realized in cooperation with the University of Uzhgorod and the Institute for Ecology and Religion which is located there. The first sequence of this project has just been successfully completed. How did this cooperation come about and what is the intention of the project?

Vogt: It was in 2000 that I met the Ukrainian counterparts in connection with my commitment at the counsel of the European Bishop’s Conference. Our common interest was to promote ecological and social responsibility. Since my early years at university I was very much interested in the chances and difficulties of a post-sovietic country on its path towards a free and plural society as well as in the role of the church in those countries. After many ecological projects and after having founded the institute “Ecology and Religion” at the National University of Uzhgorod that is dealing with these subjects I got suddenly a phone call from the Foreign Ministry. They knew about my projects and suggested that my partners in Ukraine and I could support scientifically a project dealing with civil conflict resolution. He was convinced that the churches and social ethics could play an important role. That piqued my interest.

During this project you and your assistant Rolf Husmann drafted the concept of proactive tolerance. What is special and innovative about this concept of tolerance and the social-ethical approach based on it? 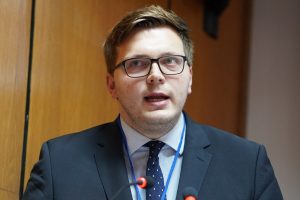 Husmann: Using the term proactive tolerance we want to highlight a new dimension of tolerance. Many times tolerance has been understood as mere acceptance of different behaviors, meanings and characteristics. That is cutting it short. Although the UN is using the term active tolerance, this does not cover all aspects of the term. The promotion of tolerance by civil commitment for liberty of speech, fair rules in society etc. are important aspects. We think nevertheless that tolerance is acting proactively on society as an attitude of appreciation and of trust allow a change of mind. Being different does not mean a threat to anyone anymore. Being different is not a flaw, but a value that promotes interest and openness and the will to learn something new. This is contributing to an atmosphere of respect. This is what you may call innovative speaking about our concept.

Ukraine is a country whose territorial integrity has been massively threatened by Russia since 2014. We have experienced the unlawful annexation of the Crimea, and people still die every day in the irregular war of so-called separatists, who are supported and driven by Russia in Eastern Ukraine. Are we German social ethicists not making it too easy for ourselves to recommend an attitude and policy of tolerance to the Ukrainians in such a situation?

Vogt: We have experienced that the project met with some mistrust at first. But there wasn’t a reason for doubt. We made very clear that we take the conflict serious. It would be way too easy if we banalized the conflict what we did not do and our partners quickly understood that we did not do. Tolerance is a term of conflict that means that tolerance becomes relevant and visible when there is a real conflict that makes us differentiate between situation in which tolerance is a demand of justice and others in which democracy has to be defended. Indifference is in no way tolerance! The Russia-Ukraine-conflict is therefore a challenge to define the confines of tolerance. To make it crystal-clear: The aggressions by Russia must not be played down and can never be tolerated. But there is also a “afterwards” and we should take it into mind.

In recent years, intolerance and resentment have noticeably increased in Germany, especially in connection with the disputes over migration and multiculturalism. Can we Germans learn something from the Ukrainian example about coexistence in religious and cultural diversity?

Husmann: Quite a lot. Ukraine has been a melting pot of cultures and religions for centuries. Ukraine and especially Transcarpathia have always been profiting from diversity. This can be seen in the cultural and economical wealth during the period of the Austrian-Hungarian reign. Even today Ukraine is a learning-place for Western Europeans in matters of tolerance. Tolerance, social exchange between groups and religions play an important role in Ukraine’s everyday life. Moreover, they created institutionalized forums for their communication. Having said that we do not describe ourselves as exporters of Western culture but as learners that enjoy participating in a dialogue between East and West.

In their paper “Proactive tolerance as a way to peace” Prof. Dr. Markus Vogt and Rolf Husmann outline the theoretical framework of the project.