The members assembly of Ordo socialis hold in the Catholic Social Institute (ksi) has elected Prof. Dr. Ralph Bergold, director of the ksi, new president. Ordo socialis was founded 1986 in Cologne by imitative of the Association of Catholic Entrepreneurs (BKU) as an scientific association for the promotion of the Christian social teaching. Its central mission is the worldwide diffusion of texts covering subjects of the Christian social ethics into and from several languages. The work is supported by a scientific council composed by 45 highly qualified experts from four continents. The new president who follows the president Cornelius Fetsch, exercising this function since the foundation and who retires on his own wish, intends to accentuate above all the international aspects of the work of Ordo socialis. 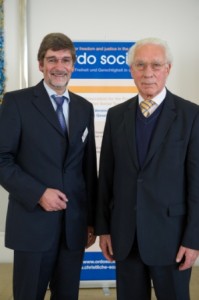 Cornelius-Georg Fetsch who successfully led and promoted Ordo socialis for 27 years has been elected member of honor. The executive committee and the members attending presented their thanks to him for his engagement. His presidential style was marked by human sensitivity and the will to find common solutions in a constructive working together. As an expression of thanks and acknowledgement a beautiful volume with photos of the Sistine Chapel was presented to him. C.G. Fetsch will not simply retire; by his experience he will stand-by the new president.

A new treasurer has also been elected. Peter van den Brock, retired director of the Pax –Bank e.G. and member of the board of Pax-Bank Foundation has accepted this function.

On 16 November 2013 the Ordo socialis award will be conferred for the first time. Laureate is Prof. Dr. Paul Kirchhof. The ancient Minister-President Prof. Dr. Bernhard Vogel has accepted to give the eulogy.